Can you remember the Chernobyl Nuclear Accident?
The Belarusians and the Ukrainians can.
They are still suffering from the legacy of the world’s worst nuclear disaster......... 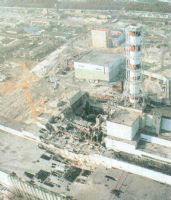